These guidelines explain removal of the Canadian Security Intelligence Service virus, also known as CSIS ransomware. This is a serious screen locker, i.e. the desktop hijacker that attacks computers in Canada with its scary yet fake police warnings and asks users to pay certain amount of funds to have their systems unlocked. Instead of obeying the fraudulent instructions of this scam please rather follow the instructions set forth below that explain effective removal of the CSIS virus off your computer. 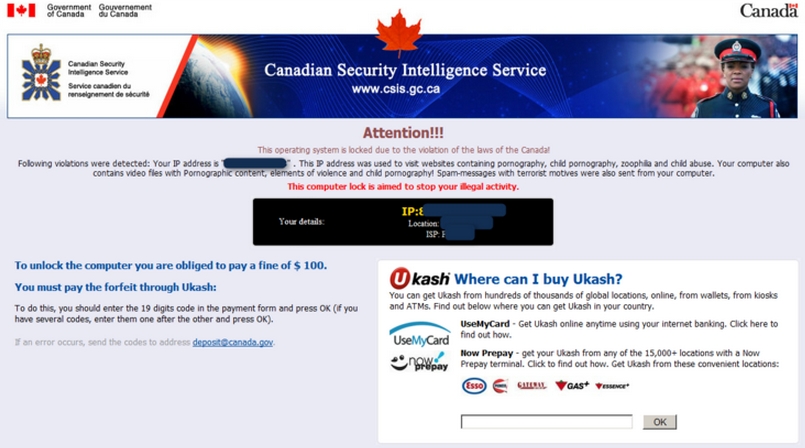 The virus that uses the good name and the logo of the Canadian Security Intelligence Service has been first traced quite a long time ago. In fact, this first took place last year when CSIS ransomware began attacking computers in Canada. The locker was live withing quite a long duration of time, being subsequently replaced by other ransomware samples from Urausy and Reveton virus families.

These days it seems like CSIS malware is being revived by hackers who own it and who want to get benefit from spreading this virus around the web. Again, the crooks who have developed this scam have in mind to trick users into paying the funds through Ukash payment system. They accuse users of performing a lot of crimes online through their computers. So, in order to unlock their system, hackers prompt users into paying the fine in their favor. This ransom is suggested by these frauds to be paid through Ukash, which is very popular in Canada. However, hackers will never tell you that the money goes into their pockets. They assert that this is the forfeit that should be paid into the Canadian treasury or budget.

It is possible that CSIS virus has been amended by hackers at the lapse of certain time after its initial release. Nevertheless, the text of the fake accusations may look similar to this one:

Government of Canada
Gouvernement du Canada
Canadian Security Intelligence Service
Service canadien du renseignement de sécurité
www.csis.gc.ca
Attention!!!
This operating system is locked due to the violation of the laws of the Canada!
Following violations were detected: Your IP address is [removed]. This IP address was used to visit websites containing pornography, child pornography, zoophilia and child abuse. Your computer also contains video files with pornographic content, elements of violence and child pornography! Spam-messages with terrorist motives were also sent from your computer.
This computer lock is aimed to stop your illegal activity.
To unlock the computer you are obliged to pay a fine.
You must pay the forfeit through Ukash.
To do this, you should enter the 19 digits code in the payment form and press OK (if you have several codes, enter them one after the other and press OK).

As you know, there are two official languages in Canada, which are English and French. No matter which one is native for some particular user, he/she still needs to know that in spite of this scary alert visible on the screen, this is a fake warning which has nothing to do with the Canadian Security Intelligence Service at all. So, do not ever pay the fine in favor of cyber frauds, the owners of this scam that strikes Canadian PCs these days. Don’t disclose those 19 digits of the Ukash voucher code. Don’t transfer any information in favor of hackers through email deposit@canada.gov (in case such offer of hackers is contained in the scary message).

Get yourself prepared to effective removal of Canadian Security Intelligence Service ransomware from your computer. You need to understand that there might be several variations of this locker. We don’t know which one may attack your PC, nevertheless we’ve introduced some ransomware removal solutions for your consideration. Please find them listed below. Hopefully, by following them you’ll be able to eventually get rid of fake CSIS warning at your desktop and unlock your PC from this scary alert, which is obviously a fake police notification.

So, we do recommend you to try the above method initially. Then, if it does not work, try these other guides below. It is probable that these other methods will be effective solutions to fix your problem. If this information has been helpful to you please share it with other friends of yours.

Alternative removal guides to remove ransomware from your computer: