The USA today is under the attack of a serious virus that uses the name and the logo of FBI Cybercrime Division. This malware is the product of online hackers who want to deceive simple and law-abiding US citizens, making them waste their money for nothing. The scam also has the ICSPA (International Cyber Security Protection Alliance) illegally. But what’s more outrageous, it gets into computers secretly, locks the screen completely and asks users to pay the ransom allegedly in order to have the system unlocked. To make the potential victims obey the fraudulent instructions of hackers, the malware gives a large list of fake accusations, stating the large variety of crimes which users have most probably never committed through their computers. In other words, the fake FBI warning accuses users of performing such kinds of illegal activities online. Obviously, this is a real scam that has in mind to bring turmoil into the minds of many people. This article describes just one of many ways how to unlock your computer infected with FBI virus on it. If you don’t feel like reading too much info about this scam, go ahead and watch the video guide on how to get rid of this malware. If you would like to know more facts about this scam you may get more details underneath of this video.

Anyway, let’s delve into some details about FBI Cybercrime Division scam. Obviously, this is a fake alert that has nothing to do with FBI or ICSPA. This malware belongs to the Urausy ransomare family. This is the international type of malware that has many other similar modifications in many other countries of the world. Few months ago only Europe was the primary target of it. Now the US, Canada and even the Arab world is being attacked. Obviously, if you live in the US the chances are that this particular FBI Cybercrime Division scam will target your computer. Whether this scam will be successful or not depends on how powerful and smart your security software is. Still, it is a sad fact to admit that right now there’s no 100% defense against malwares, and some PCs in the USA became infected with this horrible locker.

Once the FBI Cybercrime Division malware gets into computer the entire desktop is utterly locked with the scary alert, supposedly coming from FBI. The warnings begins listing the variety of crimes, saying that you are the person who committed them all. Here is the quotation from what this locker actually says:

Do you realize the trick played by hackers, the authors of this scam? They promise to unlock your system on the condition that you first pay the fine of $300 within the next 72 hours using GreenDot MoneyPak PIN code information. The frauds state that this is the fine that should be paid into the State’s account. In reality, this is the ransom, and the funds in this case go into the pockets of these crooks.

So, don’t ever pay any fine as prompted by fake FBI Cybercrime Division warning. Don’t disclose the financial information associated to GreenDot MoneyPak vouchers! If you do so you’re supporting the online hackers, not the State. Even if you have committed some of such things listed above it’s time to repent and live a holy life. But surely you don’t need to pay this pseudo fine, because this message in its entirety has nothing to do with the US government, police, FBI, GreenDot or anything legal whatsoever. Instead, this is a typical virus, to be more simple. We recommend you to follow one simple solution that can actually help you in the matter of unlocking your screen and getting back your system to normal functioning. We’ve caught this FBI Cybercrime Division malware on our computer and managed to create the video guide that explains to users how to remove this hoax from their systems. This methods, however, is just one of many other methods. Whether they work or not depend on the modification of some specific malware locker. But why don’t you give it a try? This is quite simple, in fact. You simply need to restore your computer into Safe Mode with Command Prompt and perform some commands that will lead you to System Restore option. More information on how to do it can be retrieved by viewing this removal guide. Alternatively, simply watch the video tutorial above. Don’t forget to scan your computer with reliable security program that we recommend in the upper section of this blog, after you’ve completed system restore procedure. Good luck! 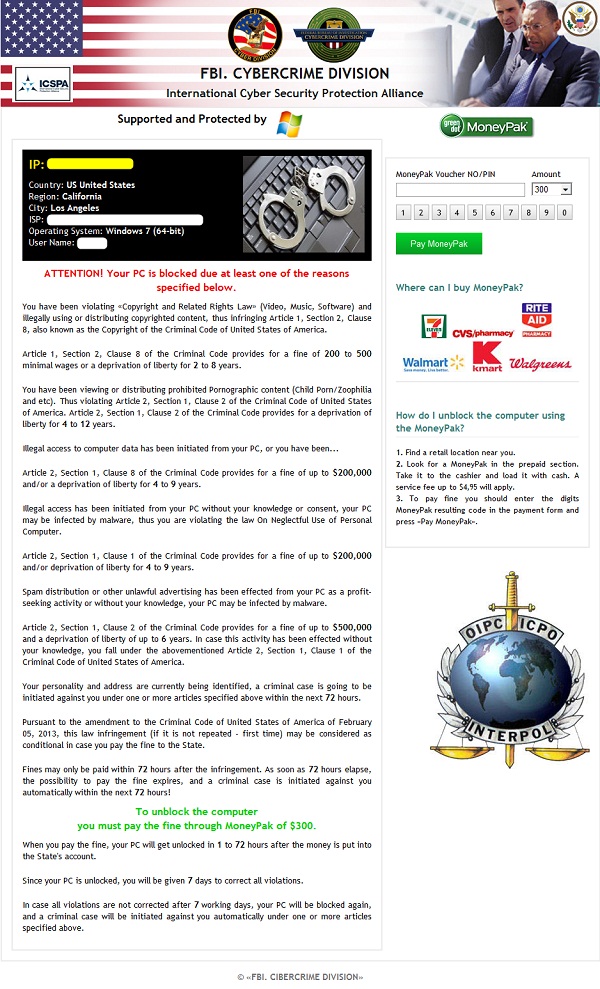 Other recommended removal guides to remove ransomware from your computer:

4 Replies to “Remove FBI Cybercrime Division warning off your computer”