The United Kingdom is currently attacked by a virus that is considered by some persons to be associated with Police Central E-Crime Unit (PCEU). However, this decent law-enforcement body of Great Britain has nothing to do with this scam. Some think this police alert is associated with Metropolitan Police. This is a wrong idea as well. The virus contains the logos of these above-said UK’s agencies and right-protecting organizations, including the names and the logos of Cheshire Police Authority and EC3 Europol and even ICSPA (International Cyber Security Protection Alliance). Yet, the truth that we know about this malware is that it is the direct product of cyber frauds, the authors of many other ransomware lockers of Urausy and Reveton virus families. So, to say “United Kingdom Police scam”, or “United Kingdom Police virus” isn’t really correct. Similar, to speak of Cheshire Police Authority as a virus is a wrong understanding of the problem as well. Yet, this is the exact way how some users make their inquiries in the search engines, after their systems got locked with a serious ransomware developed by the group of online frauds and really instrumental hackers. Here is how the fake United Kingdom Police warning looks like in reality: 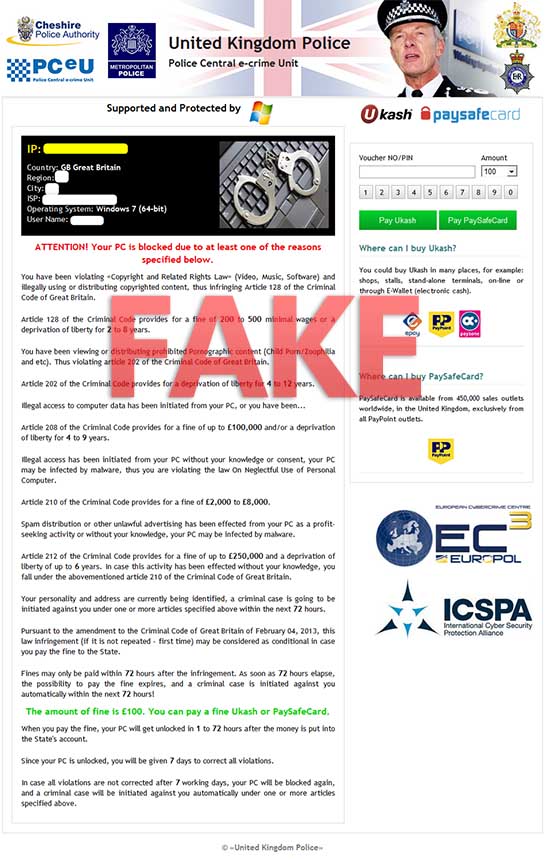 So, what happens after PCEU fake warning gets into attacked computer? Quite a horrible sequence of events, in fact. First, the entire desktop gets locked with a fake warning supposedly coming from United Kingdom Police (Cheshire Police Authority). Obviously, this is a trick of hackers to make users really scared. Why do they get scared, by the way? Well, primarily because their screen gets utterly blocked and they can’t do anything they want or need to. Furthermore, the fake PCEU warning accuses users of performing various crimes online through their computers, and this is how the ransomware explained the reason why the PC got blocked. Obviously, this scareware has another mission in mind. It clearly states that in order to have the computer unlocked user must pay the fine, supposedly in favor of the State. Yet, the truth is that this ransomware is the direct way how hackers earn unfair money by tricking users and ripping them off. The virus instructs users to pay the fine equal to £100 through Ukash or Paysafecard payment systems. Obviously, if you do so, you will never get your money back. So, never act as the ransomware tells you to act. Don’t obey the fraudulent instructions of cyber crooks.

United Kingdom Police scam belongs to the Urausy virus family. It might be that there will be some other malware modifications with similar design. We’ve been able to catch this virus and test it on our computer. Luckily, we’ve found several ways of how it can be removed and how the desktop can be unlocked. Please first of all refer to our recommended malware removal methods. If they don’t work, then try the alternative removal solution through System Restore.

Recommended removal guides to remove ransomware from your computer: