The fake Royal Canadian Mounted Police warning is a virus classified as ransomware. By some users it is referred to as RCMP virus or ransomware. This alert on the screen is not associated with Canadian police or any other legal body of this country. Instead, the warning that suddenly appears on many computers is the desktop-locking application elaborated by the team of instrumental hackers who want to earn a fortune through tricky, scary and deceptive methods. This guide explains how to get rid of Royal Canadian Mounted Police virus off your computer and unlock your system. 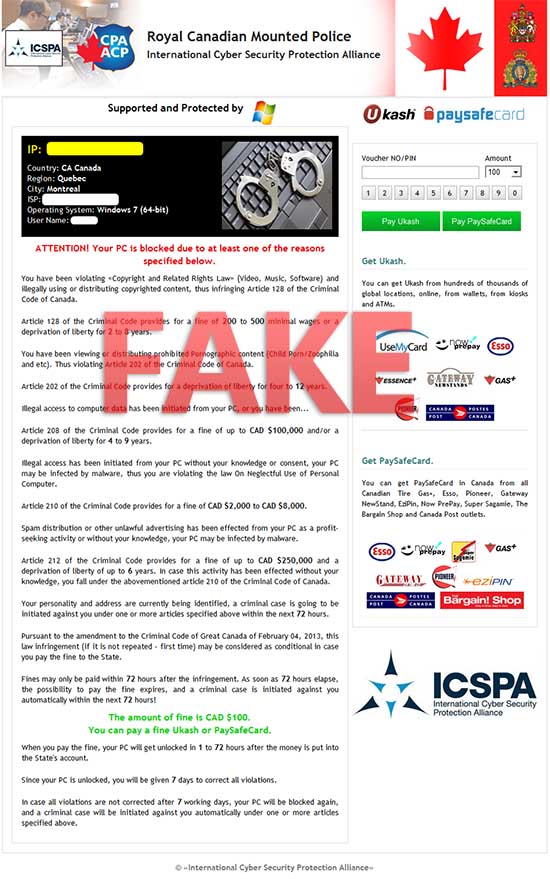 There are various modifications of RCMP virus warning. Two large ransomware families that use this good name of Canadian police are called Urausy and Reveton. We honestly don’t know why exactly they bear such names. What we know is that they both act very aggressively. Once the malware enters the computer the entire desktop (screen) of it gets absolutely locked with a fake Royal Canadian Mounted Police alert. It begins condemning user, the owner of the locked machine, of performing various crimes online through the attacked computer. Then the virus tells that in order to unlock the computer user must pay the fine in the amount of CAD 100 through indication of Ukash of Paysafecard voucher of PIN code in a special field of the locker. The ransomware infection states that this money will go to the state budget or treasury as a fine for the crimes user has supposedly committed. In reality, the funds (if paid) will be directly credited to the accounts of the crooks. As you see, there’s no point paying such fine, because obviously this is a fake fine. To be more accurate, this is the ransom which hackers want you to pay in their favor.

Here is what the locker actually says once it infects your computer:

The problem with unlocking computers infected with Royal Canadian Mounted Police (RCMP) virus is surely essential for many computer users these days, especially those that live in Canada. The chances are that some other countries might also be attacked by this scam, even though Canada is the primary target. Yet, another side of the coin is that there are various solutions of unlocking computers infected with RCMP ransomware. If one attempts to simply reboot the computers regularly he/she would obviously fail to restore the system in such a primitive manners. Hackers aren’t that stupid to let the locker leave machine simply by rebooting. In fact, no matter how many times one restarts the PC regularly, the same locked status of the machine remains, as well as the scary yet fake Royal Canadian Mounted Police alert.

We know several solutions for unlocking system attacked by RCMP scam. One of them implies restoring the computer to previous state through System Restore Point. Again, this is just one of many working methods to unlock the computer. There are many other working solutions as well, and you should try them first of all. Use System Restore method only if other methods don’t work. If you have any questions with regard to this or other problem with your system please let us know. Decent comments are always welcome!

Recommended removal guides to remove ransomware from your computer: