If you have struggles removing My Safe PC 2014 fake anti-virus there are several helpful malware removal solutions for your to consider. But first let us discuss more about this rogue security software that names itself as My Safe PC 2014. This program is another example of applications that you should not trust. Why is it so? Because it was specifically developed for the purposes of scaring users with its misleading, faulty and deceitful reports. You see, when it enters computers with poor security status it arranges the fake scan of your computer. This imitated scanning is arranged each time you turn your computer on. Such amendment was implemented by the rogue during its installation process. So, you would have to face the interface of this malware each time you turn your computer. By the way, if you decide to close its window the virus would come anyway and tell you the same story about various threats detected by it. 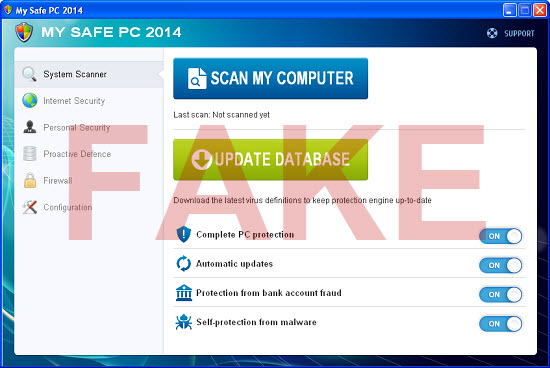 Trusting My Safe PC 2014 is a serious mistake some people have already made. It is not a good idea to invest your money into the software that doesn’t help your PC become cleaner. Well, this is the exact story about this program. In spite of its numerous attempts to persuade you in its anti-virus capabilities, this software is entirely helpless and, as we said, aims only to get your money. It cannot help your PC to be secured from threats because it wasn’t designed for such purposes. Those guys who elaborated it are the bunch of frauds who are smart software developers, but, unfortunately, they use their brain for evil deeds instead of helping users. So they invent programs like My Safe PC 2014 to rob people. Be not in the list of those users who were deceived and tricked by this rogue software sample. Remove it using the reliable anti-virus tools like the one recommended below. To remove the rogue please follow the detailed instructions underneath of this article.

Example of similar removal in Windows 7: