This article renders removal instructions for Antivirus Security Pro malware. This rogue antispyware is the direct successor of Attentive Antivirus scam described by us not so long ago. The ways of its malicious behavior on the attacked computer is typical to all rogues. First, it enters PCs without user’s consent or approval, then it runs the fake system scan and reports many invented security threats which surely aren’t real. This is all done to persuade users to buy its helpless license or registration key, which is absolutely incapable of detecting and removing real computer infections. If your system became the target of this rogue please continue reading these instructions to get valid tips on its effective removal. 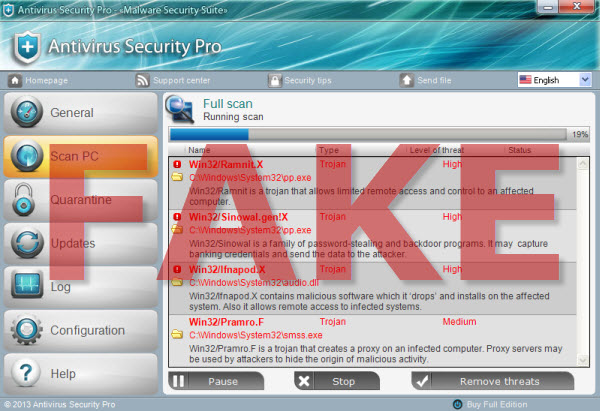 The hackers that invented Antivirus Security Pro rogue anti-malware aren’t concerned about the security of your PC. Instead, they simply invented their program in order to deceive users and to prompt them into buying the totally helpless and useless security software (fake anti-spyware program). Some people have already been tricked by this shameless forgery and thus wasted their funds, without getting any decent services in response. So, obviously, you should be warned in advance of this malware. When you actually face it on your system please remove this badware as instructed herein.

It is clear from the behavior of Antivirus Security Pro that it is a typical malicious application. The imitated scanning of this rogue only continues within a few seconds, then being ended with a fabricated report about various sorts of infections allegedly detected. Nothing you hear to be reported by this rogueware should be trusted. This infection simply tries to trick you and to prompt you into paying for the helpless services of it.

If you don’t have powerful anti-virus tool installed consider the one recommended by us – Plumbytes Anti-Malware. It can help you eliminate Antivirus Security Pro rogue from your system effectively and completely. In some cases it is also recommended that you first reboot your PC into safe mode with networking to facilitate the removal process. However, under all circumstances, please carefully follow our detailed and step-by-step uninstall instructions for this particular fake antivirus.