Attentive Antivirus is a fake antivirus software. It cannot protect your system and will never detect real infections on your computer. You can’t rely on this application because it was simply not designed to protect your computer against malware. What it literally does is infiltrating your PC illegally, imitating scanning of your system, reporting fake infections (invented threats) and prompting you into buying its helpless licensed version. Use this guide to terminate the process of Attentive Antivirus scam and remove it completely from your computer. 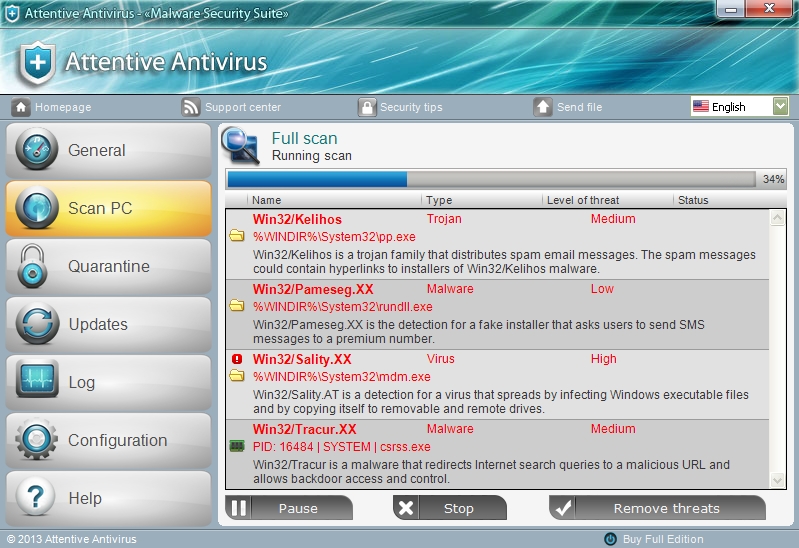 When your system is infected with Attentive Antivirus hoax you may also encounter the following images popping up at your screen:

Attentive Antivirus scareware is the same as System Doctor 2014 rogue security software. It promises a lot but when it comes to real works the program turns out to be totally idle and helpless for malware removal. When the virus gets installed onto the infected computer it immediately begins its fabricated system scan. The next step for it is to report various fake viruses, infections, spyware, keyloggers and Trojans supposedly revealed on your computer. Do you think they are all real? No, of course, not. The rogue simply tries to scare you with such misleading statements. Just as many other fake anti-viruses, this particular bogus anti-virus program gets launched automatically each time user starts Windows OS. So, when turning the PC on Attentive Antivirus hoax will be the first thing to appear. Immediately it starts implementing its plan on scaring you with its deceptive information. The worst thing about this rogue is that it actually wants you to purchase its license. But, as are probably already aware of, this licensed version is not powerful at all. It is as fake as those bogus virus reports of this scam.

Successful and effective removal of Attentive Antivirus malware is what bothers many users today. The virus typically terminates all your attempts to delete it using the common software removal principles and steps. You will not be able to find this software in the list of Add / Remove programs of your Control Panel. When trying to launch any legitimate anti-virus software you will face the warning of the hoax about inability to do it because of this exe-file being supposedly infected. So, this program is quite tough and persistent, it surely does not want you to remove it because it hasn’t completed its goal yet. As you remember, it wants you to buy its full version, but this is the serious mistake on your part and the total waste of money. There are many sites nowadays that offer guidelines on how to get rid of Smart Fortress malware effectively. We would like to introduce to your attention our removal method that will help you overcome this malware effectively. This method works both for Windows XP and Windows Vista / Windows 7 and 8 operating systems. It will not take too much of your time, so you will manage to eliminate the hoax within about 10 minutes or even less. What you must do is carefully follow the steps described below.