PC Defender 360 is a fake antivirus, the successor of PC Defender Plus scam. Its process is called pcdefender.exe , whereas the typical location in all operating systems is a folder called ifdstore . The methods of its removal from the infected computer vary depending on the type of the operating system which got attacked by the rogue. In this guide we explain how to remove PC Defender 360 malware both in Windows XP and in Windows Vista, 7 & 8 OS versions. 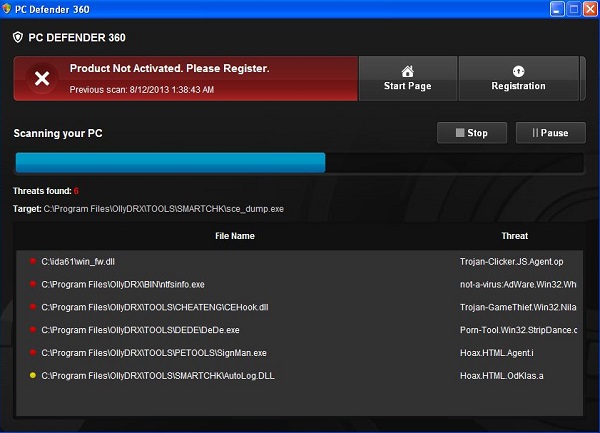 PC Defender 360 is a malware, the product of cyber hackers and frauds. Instead of inventing powerful security software they created another rogue software that simply claims to be able to remove threats, but in reality it is not able even to identify them. So, as you see, this software is totally idle and unable to help you. Once you detect it on your PC make sure to remember what we told you in this article. You’re dealing with a rogue anti-spyware application that mimics a real PC scan, instead of actually running it.

PC Defender 360 scam is famous for its fake PC Defender 360 Firewall Alert. The malware reports all legitimate executables (programs) as malicious, including all installed Internet browsers, security programs, Task Manager, cmd.exe, taskkill.exe and other legitimate Windows files. The following alert comes up in each of such attempts: 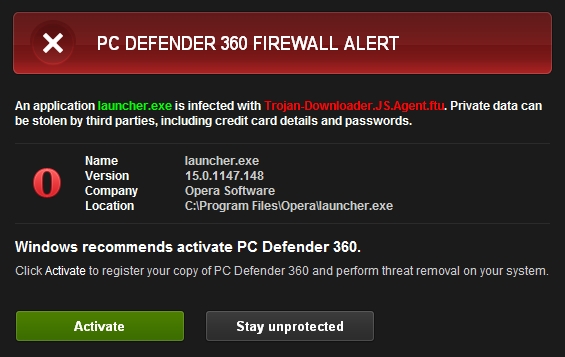 There are many ways how infections like PC Defender 360 may enter your system. In the majority of cases this happens because of the poor security level on your PC. This means that the legitimate anti-virus program you have on your system failed to do its job due to outdated anti-virus database of it. Some users, in fact, prefer not to have any antivirus tool at all. In such cases there is nothing to be surprised about when pests like this one enter your system.

Security Alert
Vulnerabilities Found
Background scan for security breaches has been finished. Serious problems have been detected. Safeguard your system against exploits, malware and viruses right now by activating Proactive Defence.
Upgrade to full version of PC Defender 360 software package now! Clean your system and ward off new attacks against your system integrity and sensitive data. FREE daily updates and online protection from web-based intrusions are already in the bundle.

What you should do initially is ignore the fake alerts, notifications and warnings of PC Defender 360 when it runs its fake scans and reports many bogus threats. The aim of the rogue is to lead you to the fake payment processing page where users are prompted to effect the payment for the so-called licensed version of this badware program. Do not make the mistake some users have made when they actually shared their credit card information with the crooks and thus wasted their funds when they bought the totally useless software known as PC Defender 360. To remove this scam from your system you’re recommended to follow the removal instructions below.

Example of removal in Windows 7:

Example of removal in Windows XP:

Important! To find the location of ifdstore folder make sure you can view/see hidden files of your computer. Visit this guide for additional information.