The site sgpsupport.com is real, but it is very dangerous. It is directly related to a fake antivirus program called Smart Guard Protection. If you have this rogue on your PC it’s definite that you should remove it as soon as possible.

Smart Guard Protection fake antivirus can be distributed through various illegal paths. One of them is through fake Microsoft Security Essential Alerts which claim your PC is infected and prompt you into downloading some tool that will supposedly clean it. In reality, the rogue is downloaded instead of a legitimate cleaner. Yet, there are very many other options how this scam can be brought to your system.

This is the screenshot from site sgpsupport.com:

Truly, this site has a good design, but there’s nothing fair in it, as well as in the rogue program it represents. Smart Guard Protection fake antivirus has the only intention, that is to scare you a lot with its faulty information presented during its fake system scan of your computer. This fake scan is initiated each time you turn your PC on. The summary of it quotes a lot of fake and obviously invented threats which simply don’t dwell on your computer.

The rogue wants you to buy its license, which is absolutely helpless in removal of real computer viruses and infections. Thus, Smart Guard Protection is a fraudulent tool in the hands of cyber hackers and crooks. You need to remove this scam using a reliable security software. The removal instructions for Smart Guard Protection are very simple and can be easily followed even by beginning PC users with computers attacked by this hoax. 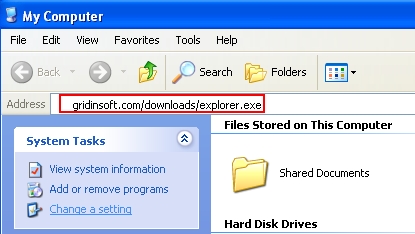 Note! The link above is for download of explorer.exe free utility developed by Plumbytes LLC to help users terminate rogue security programs by their window title. If for some reasons you can’t download this explorer.exe file through your infected computer, then you may download it from a clean computer and then simply copy it into your infected PC through USB Flash Drive (a.k.a. Jump Drive, Pen Drive or Memory Stick).