Internet Security virus when running blocks launching of many legitimate programs. This includes applications like Task Manger, cmd.exe, taskkill.exe commands, the majority of browsers, and even regular programs not associated with rendering security services for your PC. The rogue called Internet Security 2013 reports all executables as infected with a strange virus W32/Blaster.Worm, which doesn’t exist in reality. All such attempts to launch legitimate programs will be blocked by Internet Security virus, unless you stop its process (now called meprotection.exe).

Without a doubt, Internet Security is a rogue antivirus softare. Apart of fake alert about legitimate files infected with W32/Blaster.Worm it displays many other fake alerts, warnings and notifications which aren’t true. It reports all kinds of bogus infections in order to make users believe their system is in a horrible condition. Then the rogue tells users to purchase its license, which is obviously a waste of user’s time and money, because Internet Security reports fake threats and is not able to remove real ones.

If Internet Security virus attacked your system you should ignore all its bogus warnings and notifications. Do not buy this rogue! Instead, we suggest that you follow the removal instructions that will help you stop the process of it – meprotection.exe. Then, after the process is killed, you should completely remove the rogue antivirus called Internet Security as explained in further instructions set forth below. If you experience difficulties while killing meprotection.exe, you’re welcome to watch the video guide that explains this process in all details. 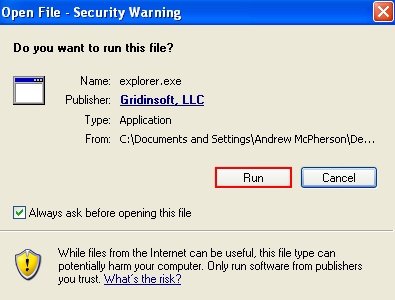 Important! The virus process has only been killed. Whereas the malware called Internet Security hasn’t been removed. If you reboot your PC it will come up again. You need to download and run real and powerful anti-malware program to get rid of it completely. You may do it with Plumbytes Anti-Malware that can be downloaded below.