The alert that asserts ‘Warning! Infected file detected‘ is related to rogue security programs like Antivirus Security Pro, Attentive Antivirus and System Doctor 2014. All these applications are rogue security tools (also categorized as fake antiviruses). Their purpose is to scare users into thinking their systems are in danger and to make them buy the rogue, thus wasting their funds completely. The scary alert ‘Warning! Infected file detected’ is just one of many other methods to make users frustrated and convince them to purchase the hoax. Hopefully, this will never be the case with you. For this reason we issue this post, which is a warning for you not to trust this really scary yet absolutely fake security alert. 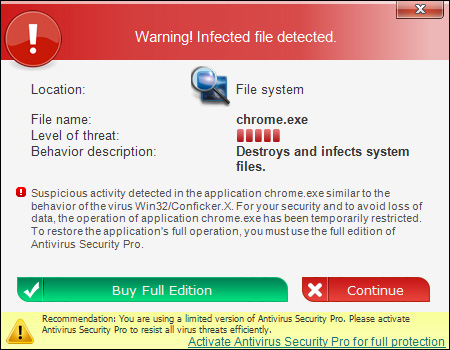 The latest rogue, Antivirus Security Pro, as well as its all other predecessors, have the multinational GUI design, resulting in all fake alerts of this virus being presented in various languages, not just English. Hence,the ‘Warning! Infected file detected’ fake alert may have the following translations into other languages:

Whatever language is used, the alert is fake in all cases. This is a technique used by hackers to make people believe their PC is in a horrible condition, in order to persuade users to buy the rogue security software. Instead of performing these fraudulent instructions go ahead and follow our detailed removal guide below which will assist you in getting rid of this rogue antispyware from your system.